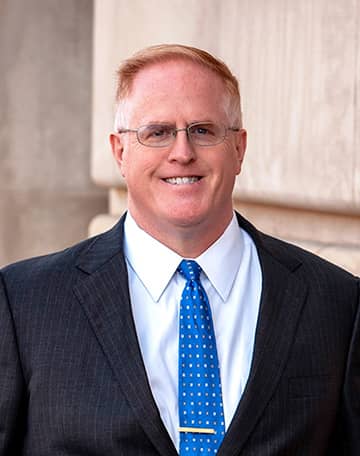 Bill also serves as Alternate Defense Counsel in certain courts in Weld County where he is occasionally appointed to represent clients with whom the Public Defender has a conflict. He is a member of the National College for DUI Defense (NCDD), DUI Defense Lawyers Association (DUIDLA), Colorado Criminal Defense Bar (CCDB), Colorado Bar Association (CBA) and the Weld County Bar Association (WCBA). Since 2009, Bill has either taught or participated in more than 250 hours of DUI trainings. He predominantly handles matters in Weld and Larimer counties and the cities of Greeley, Evans, Windsor, Loveland and Fort Collins.

Prior to beginning the McAdams Law Office, Bill served as a Deputy District Attorney for the 19th Judicial District of Colorado (Weld County) from early 2004 to mid 2006. While at the District Attorney’s Office, he handled felony and misdemeanor matters. This included DUI, domestic violence and traffic matters. He participated in approximately 40 jury trials while in this office, numerous court trials and hundreds of motions hearings.

Prior to being a Deputy District Attorney, Bill practiced in the Denver area. Initially, he was an associate at the law firm of Ledbetter and Associates and then was a sole practitioner. During this time, Bill handled a variety of matters including criminal defense, DUI, family law, civil litigation, probate and wills.

Bill is a native of Colorado and grew up in Denver and Boulder. He attended college at Baylor University in Waco, Texas where he earned a Bachelor of Arts degree with a double major in Political Science and History in 1994. He then attended Drake University in Des Moines, Iowa where he earned a Juris Doctorate law degree in 1999. He is an active member of his community where he serves in numerous volunteer positions in his church, on his homeowner’s association board of directors and serves on the Board of Governors for University Schools in Greeley, Colorado. His hobbies include softball, volleyball and travel.