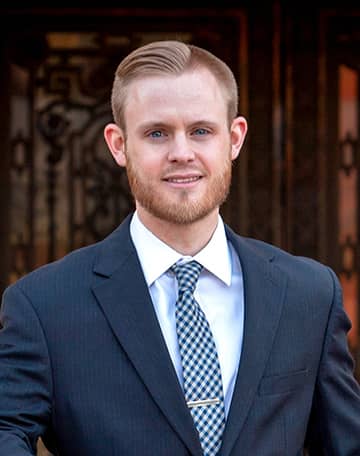 Johnathan grew up in north central Illinois, about an hour and a half northwest of Chicago. After graduating with his Bachelor of Arts in Law and Society from Purdue University in 2015, Johnathan began his trek west and stopped in South Dakota where he attended the University of South Dakota School of Law until graduating in early 2019.

While in law school, Johnathan had the opportunity to begin learning the ins and outs of the criminal justice system by interning with the Minnehaha County Office of the Public Advocate and the South Dakota Attorney General’s Office. Johnathan’s experiences at both offices strongly affirmed his desire to advocate on behalf of people who are going through the criminal justice system.

After law school, Johnathan moved to Colorado where he took the Colorado Bar Exam. From there, he spent a few months working for Robert Half Legal in Denver, CO, until joining McAdams Law Office in late 2019.

When out of the office, Johnathan enjoys exploring Colorado’s vast wilderness, photographing nature, watching one of his favorite sports teams, or visiting one of the local breweries or restaurants.